CONTACT US       LOG IN
WARNING: Due to increased demand we cannot guarantee your FREE spot after TODAY.
Sign up today, otherwise you will have to purchase at the normal price.

Get (FREE 6 WEEK KIDS KARATE BOOTCAMP) Life-Changing, VIRTUAL LIVE Kids Martial Arts Classes... for FREE!
(Spots Limited! Hurry!)
“I can’t believe the difference.” Our amazing Kids Martial Arts program is now offering online! Boosts your child’s focus, respect, confidence, and social skills… while they have FUN.
GET INSTANT ACCESS TO MASTER LEVEL MARTIAL ARTS TRAINING
I'm looking for 100 Kids who are looking to transform their lifestyle and lives with Online Karate Classes!
countdown
00Hours00Minutes00Seconds
CLAIM YOUR OFFER BEFORE ITS TOO LATE!
GET MY TRIAL - CLASSES PASSOnly [11] Passes Remaining!
GET INSTANT ACCESS TO OUR LIVE ONLINE SCHEDULE OF CLASSES AND START CHILD'S TRANSFORMATION 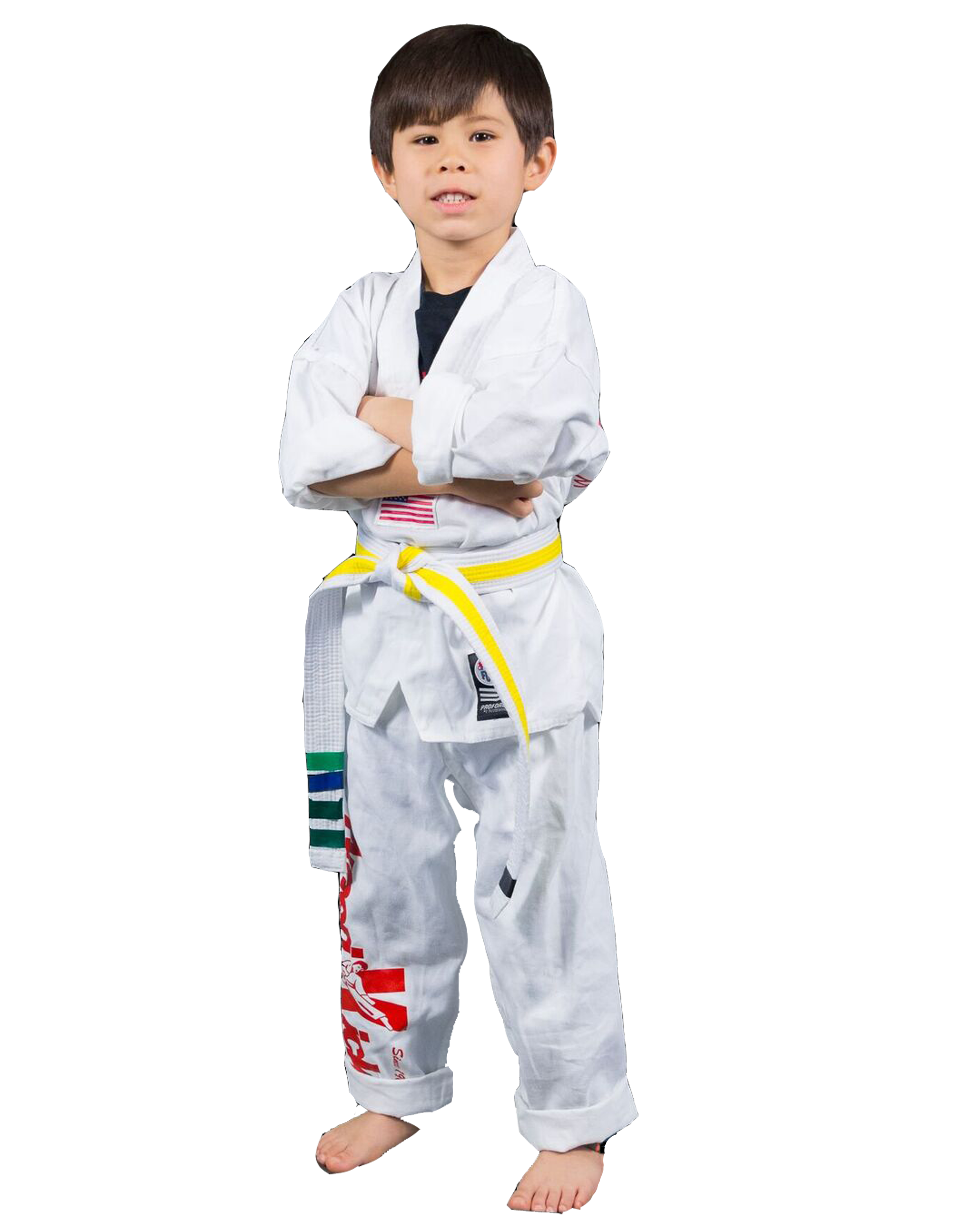 GET MY TRIAL - CLASSES PASSOnly [11] Passes Remaining!
The new way of
Martial Arts Training!
If you're anything like most of our clients, you believe in expanding your child's awareness and leveling up their physical activity, but you just don't have the time or the funds that you know you will need to get them there.

We have created a new, fun and engaging way to learn directly from those in the game...
WHAT MAKES EACH LESSON SO POWERFUL?
1.Quote of the Week
Every lesson we enlighten our students with Motivational Quotes to Inspire and Motivate before we start of each lesson.
2.The Lesson
Packed with awesome warm up, stretching and theme of the week that change with each lesson to keep your child motivated.  Kicks, Punches, Self-Defense and some cool down techniques to keep your child engaged and ready for more on the next lesson. 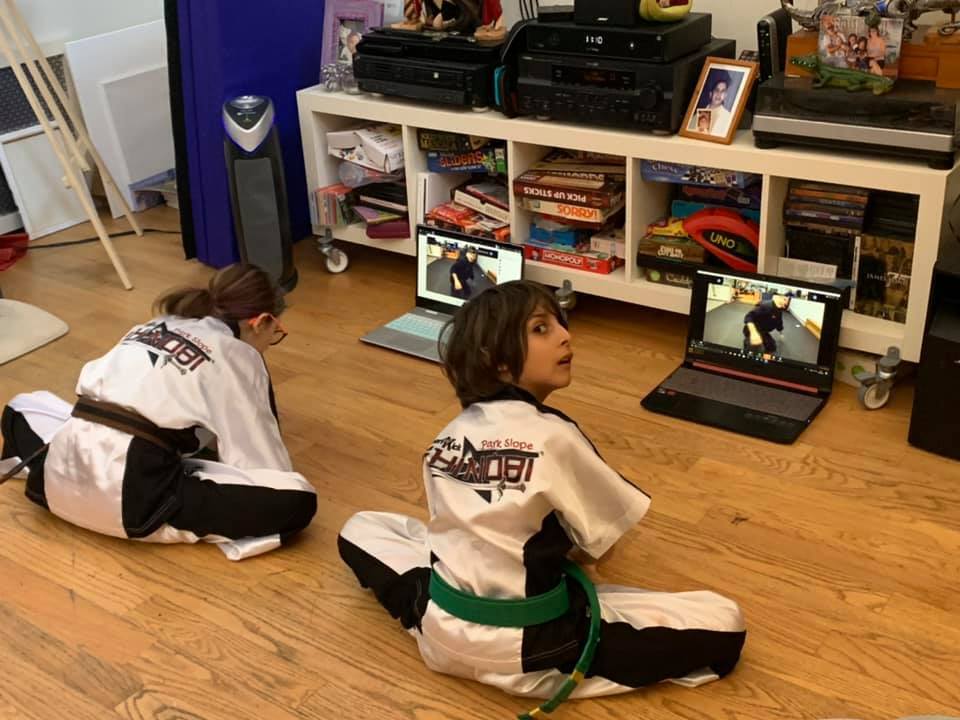 GET MY TRIALES - CLASS PASSOnly [11] Passes Remaining!
Simple and Effective Self Defense Techniques Which Don’t Require a Lot of Space
3. Sensei's Wisdom
Sensei's Wisdom is the key to our success.  At the end of the lesson we share with children experiences and make sure they do their part when it comes for Discipline and Respect where ever they are.  Discipline and Respect are the essential tools to your Child's Successful Future.
WHY DO OUR LIVE DAILY ONLINE KARATE CLASSES?
We feature only the Most Powerful lessons from our Best Instructors Guaranteed to immediately improve your Child's Character
You will be taught directly by the Elite Instructors of the Martial Arts and Experts Themselves for optimal and efficient learning...
You'll have access to exclusive video courses, workbooks, and cheat sheets that you can use in any combination to best suit your learning preferences...
GET MY TRIAL - CLASSES PASSOnly [11] Passes Remaining!

Amerikick has been so great for our boys. Although our son isn’t athletic it immediately built core strength as well as resiliency. The class is taught in such a way that the children are happy to work hard! They see positive outcomes it’s so encouraging. The classes have matured our boys in a short time and teaches valuable life lessons as well as physical acumen. We are so grateful we were introduced to this course. Both our boys have already shown positive achievements both in school at home!

Amerikick Karate course has transformed my son from being a bullied kid to someone that stands up for himself and fights back rather than give in and cry. I love the words of wisdom that is given at the end of each lesson. I love the program so much that I have all 3 of my kids in the practicing.

Amerikick Program has been such a great experience for my 10 yr old son. We did the trial and obviously continues.  It's a no brainier :-) Within the first week he was already doing chores and being more obedient. Thus program not only helps children to learn martial arts but also installs discipline in a fun nurturing way that kids want to on their own. Defiantly recommend this program.

This is for MOTIVATED Parents ONLY. If you have gotten to that point where you’re tired of making excuses for your child (Traveling, It’s too Expensive, It’s too Hard, I don’t have TIME) we would love to have you. I have gone through my own transformation and my life's passion is now helping other children in their journey. 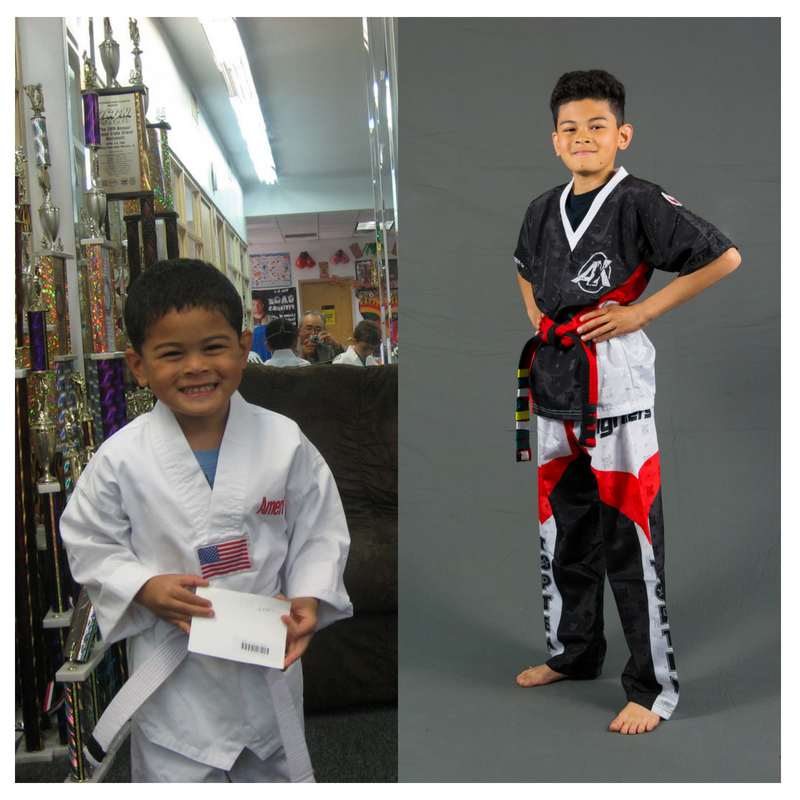 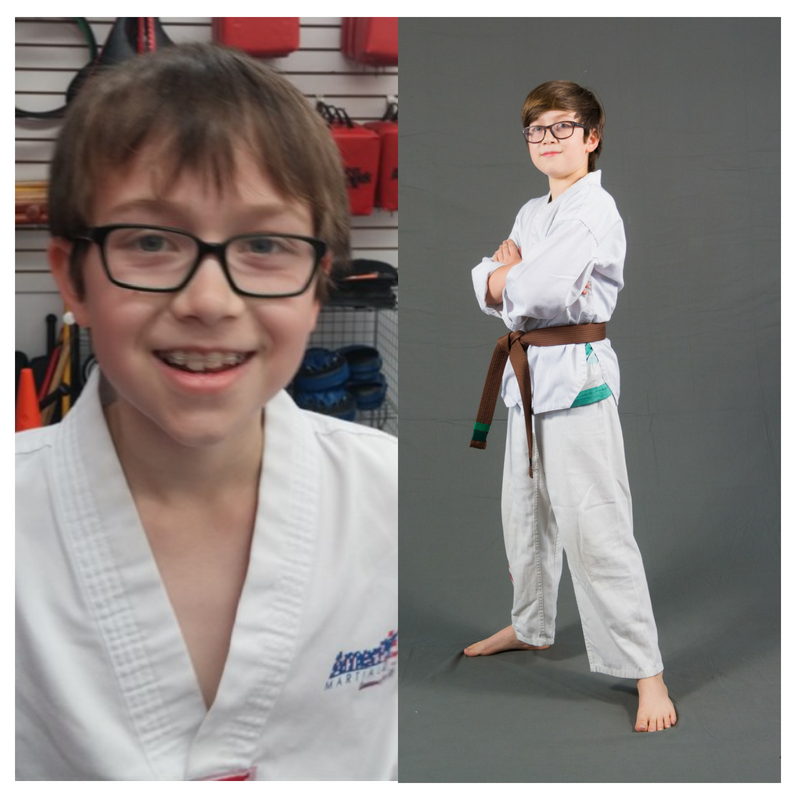 *Results Not Typical*
Your child will develop:
OUR SECRET FORMULA ON YOUR CHILD'S TRANSFORMATION
PILLAR ONE:
MARTIAL ARTS + FITNESS

MARTIAL ARTS & FITNESS
Karate is a fun way for both boys and girls to achieve fitness and focus. Some parents may think they also promote violence, but that's a myth, according to experts. The martial arts actually helps teach self-discipline and socialization skills. In fact, many parents whose children have attention-deficit/hyperactivity disorder (ADHD) report great success with Martial Arts Programs.  Self-control and Concentration are exactly the skills underdeveloped in ADHD kids.
PILLAR TWO:
CHARACTER DEVELOPMENT
DEVELOPMENT PROGRAM
We have developed an awesome weekly program to keep your child focused on building areas outside of Martial Arts. A few of these being- Organization, Manners, Fitness, Kindness/Respect, & Much More! These programs are Custom Tailored to what YOU want from your child as a parent... And don't worry we have an awesome Rewards System to keep them motivated to complete each week!
PILLAR THREE:
KEEPING THEM
ACCOUNTABLE!
KEEP THEM ACCOUNTABLE!
This may be the most important part of our program... Each week you as a parent will be checking in on their progress to keep them FOCUSED & DRIVEN Towards their GOALS! This step ties our program together and keeps YOU involved in your Child's Personal Development...
Something many sports fail to deliver!

Sensei Alex is a Multiple Time World Champion in Karate, 2x MMA Champion and Master Level Instructor. A perfect  Role-Model Graduated from Brooklyn College with Honors Degree in Business Management and Finance while pursuing his Martial Arts Career.
"The Reason Why I Created This Course Is So That We Can Change As Many Lives As Possible.  Every Child Deserves To Be Confident and Have The Ability To Stand Up for Him or Herself."
Sensei Alex Davydov
Founder of Online Kids Karate Course
GET MY TRIAL - CLASSES PASSOnly [11] Passes Remaining! 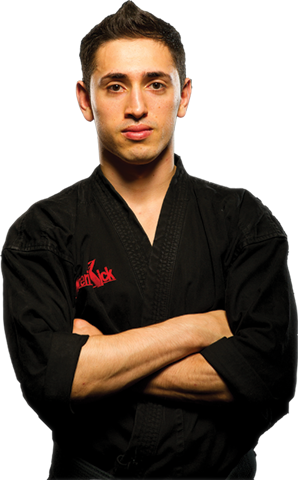 Sensei Vlad was a collegiate wrestling champion in scholastic, Freestyle and Greco styles. He has led (as captain) the wrestling team to 3 championships years in a row. Sensei Vlad was awarded the Heisman Award, Winning Numerous Championship in Karate tournament, Placing 1st in NYS Championship and AKL Internationals. Undefeated in the Mixed Martial Arts Cage Fighter.
"The Reason Why I am Instructing this Course is to impact kids and prepare them to deal with peer pressure, bullying, depression and build their self confidence to stand up for themselves. Discipline and Respect through Martial Arts Training is a Major BONUS. Let's get started!"
Sensei Vlad Davydov
Co-Founder of Online Kids Karate Course
GET MY TRIAL - CLASSES PASSOnly [11] Passes Remaining! 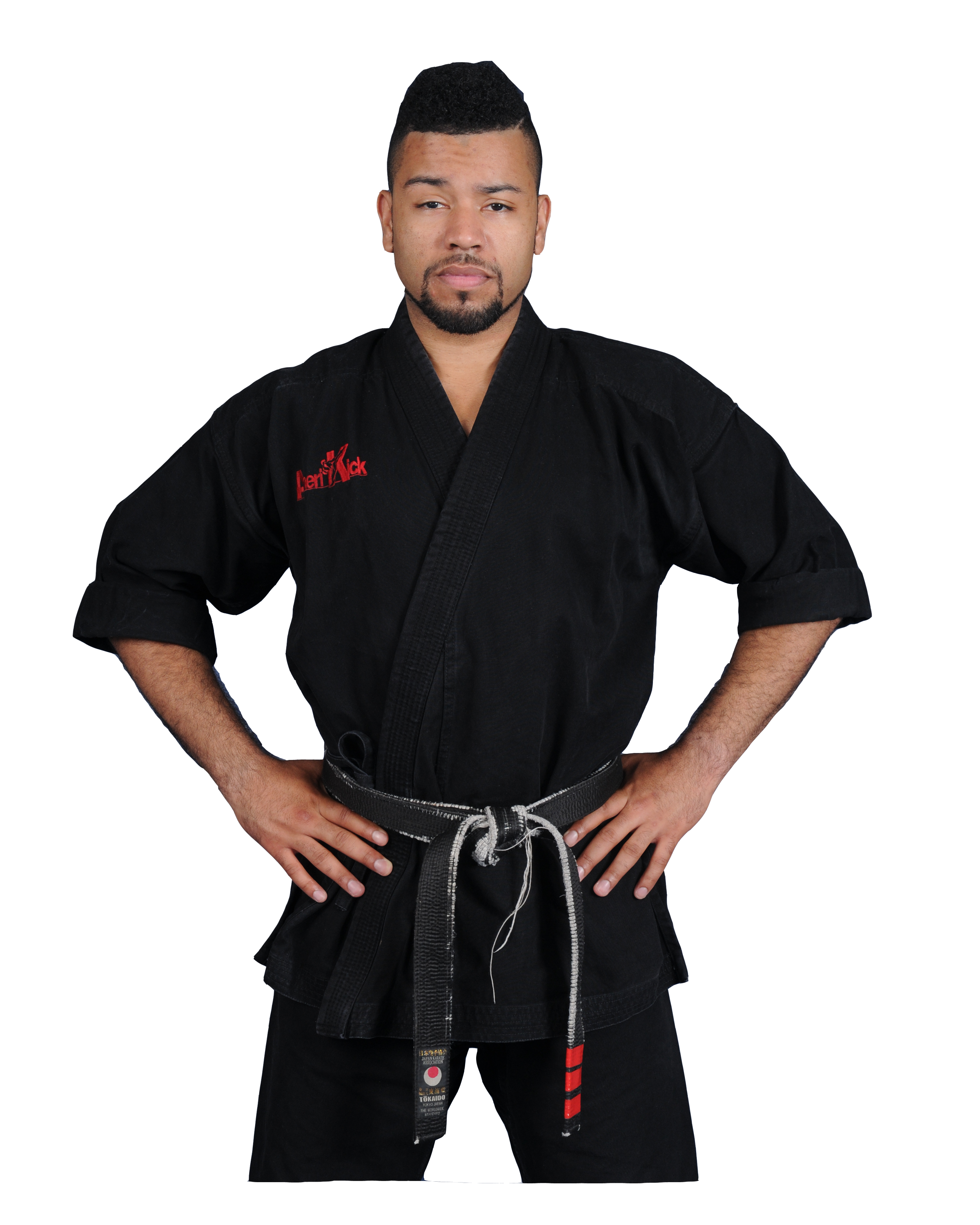 Sensei Ricky has been a practitioner of the Martial Arts since the age of 14. Earning his Black Belt in the American Kenpo and Amerikick Karate systems. At the age of 30, he is a Med student looking to venture into the Endocrinology field. He holds multiple NASKA and WKC World Championships in Weapons, Forms and Sparring, as well as Team Demo as a competitor and a Coach.
"The Reason Why I am Instructing this Course is so that I Can Improve Every Child's Discipline and Respect through Martial Arts Training. Let's get started!"
Sensei Ricky Taylor
Co-Founder of Online Kids Karate Course
GET MY TRIAL - CLASS PASSESOnly [11] Passes Remaining!